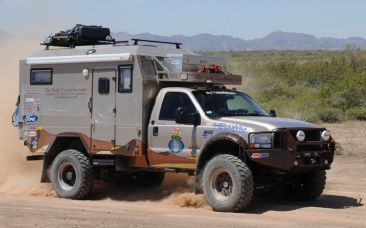 If you had stopped Gary Wescott on his way to journalism class at San Diego State University in 1967 and told him he would spend his life traveling around the World; or if you could have caught Monika Mühlebach Wescott as she peddled her bicycle home from school in the small Swiss village of Wiesendangen and tried to explain that she would join Gary in Mexico ten years later—–well, you might have en­coun­tered some disbelief.

Never-the-less, for the past thirty-nine years, these two intrepid ad­ven­turers and photojournalists have globe-trotted from the arid deserts of Afghanistan, to the deepest jungles of the Amazon, and across the frozen steppes of Siberia, with sometimes no more than a camera and a backpack. Their travel/adventure stories have been published in fifteen countries and ten languages around the World, including Off-Road, Four Wheeler, Power Stroke Registry, Front Line, My Ford, Trailer Life, Truck Trend, Motorhome, Camping Life, and other U.S. magazines. 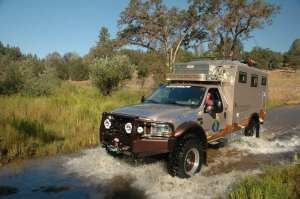 While backpacks are still an important part of the couple’s standard equip­ment, they do most of their wandering in specially prepared Ford four-wheel drive trucks. Replacing four previous travel/research vehicles, The Turtle V and its European-style Tortuga Expedition Camper is the latest home on the road. Based on a Super Duty F-550, it is carefully outfitted with equipment of proven quality and reliability. “Through years of experience, we’ve sys­tematically found out what works.” said Gary, “In the places we go, reliability becomes all-important! This is not a vacation.” 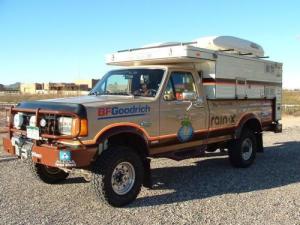 In 1989, The Turtle Expedition spent fourteen months explo­ring South America. After shipping their vehicle to Colombia, Gary & Monika drove more than 50,000 miles, circumnavigating the continent and crossing it twice. Their path took them from the snow-bound Andean Mountains, over passes as high as 16,710 ft.; across the vast Atacama Desert, where in places, a drop of rain had not fallen in recorded history; and through the jungles of the Amazon Basin in Peru, Colombia and Brazil, where mud-choked trails were often impassable, even with four-wheel drive. Barges were needed to travel up swollen rivers.

In the winter of 1996, they succeeded in driving completely across Russia, including Eastern Siberia, from the Pacific to the Atlantic Ocean. Siberia alone wraps around one third of the northern hemisphere and spans ten time zones. Complicated by the fact that there were no all-weather roads across the Far East, most experts, both Russian and American, said it couldn’t be done. In temperatures which can drop to below -100°F, plastics and rubber become brittle and even metal can crystallize and snap. Rumored shortages of food and fuel, and reports of highway robbery had to be con­tended with. Using a GPS and U.S. Defense Mapping Agency Navigational Charts, Winter Roads were followed for over 3,000 miles, including a 640-mile leg on the ice of the frozen Lena River. 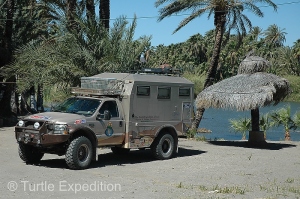 The expedition involved more than simply crossing two continents. The couple took time to explore many parts of the former Soviet Union, including Lake Baikal, Tuva, and Altai regions. Eleven months and 16,000 miles later, battling the 80-mph winds and 3-foot snowdrifts of an Arctic gale, The Turtle IV pulled into Hammerfest on the North Atlantic’s Norwegian Sea, the most northern town in the World you can drive to. To their knowledge, they had become the first for­eigners to ever drive completely across Russia without using trains or barges, and in all likelihood, no Russian has ever attempted this difficult route.

But Hammerfest was only a stepping stone, not the end of this three-year global circum­navigation. After exploring some of Central and Southern Europe, sorting through 15,000 slides, and publishing over 70 magazine articles, the couple retraced their route through Finland and continued around the World, with stops in Norway, the Faroe Islands, Iceland, New­foundland, and Nova Scotia, on their way back to their California homebase.

Long-range plans are currently under way to drive from Lisbon, Portugal, to Shanghai, China, following the Northern Silk Route. The Trans-Eurasian Odyssey will cross as many as twenty-seven countries and produce a documentary series for television on the children of each nation. 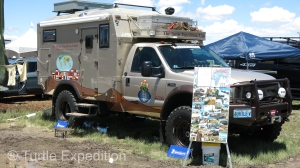 Do they worry about the political instability of some of the countries they visit? “Well, a little,” says Monika, with a slight Swiss accent, (she speaks five languages), “but what can you do? In over thirty-eight years we’ve rarely had a serious problem. It’s like the poisonous snakes and insects of the Amazon. You know they’re out there, but you still go into the jungle. The essence of an adventure is not knowing how it’s going to come out.”

While many envy Gary and Monika for their unique and exciting life-style, most of us are more inclined to remain armchair adventurers. We must be content to read—or watch—from a safe distance. The full-time travels of The Turtle Expedition, Unltd. may look like an endless vacation. “Actually,” says Gary, smiling, “it’s a lot of work—but someone has to do it.”