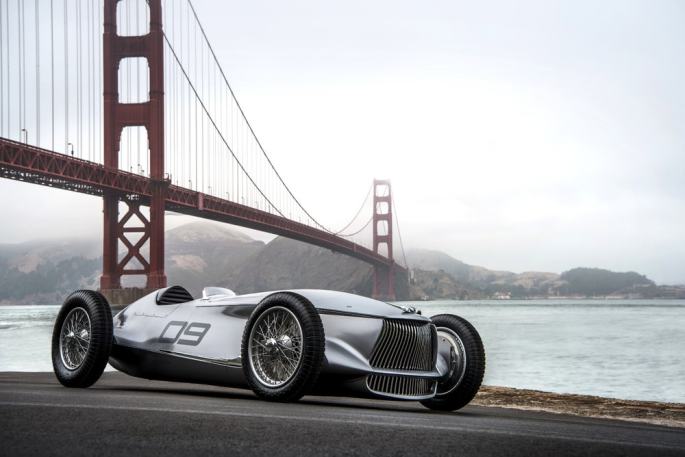 Out of all the fun one-offs produced for Pebble Beach, this Infiniti Prototype 9 may be one of the most striking. Built to resemble a pre WWII racer while being powered by a high-tech electric powertrain, the Infiniti Prototype 9 represents everything beautiful design can bring out of an automobile. It is a rolling sculpture with amazing details on a shape that appears simple at first.

“Prototype 9 celebrates the tradition of ingenuity, craftsmanship and passion of our forebears at Nissan Motor Corporation, on whose shoulders we stand today. It started as a discussion: What if INFINITI had created a race car in the 1940s? If one were to imagine an open-wheeled INFINITI racer on the famous circuits of the era, such as Japan’s Tamagawa Speedway, what would that look like? The sketches were stunning and the idea so compelling that we had to produce a prototype. As other departments became aware of this, they volunteered their time to create a working vehicle.” 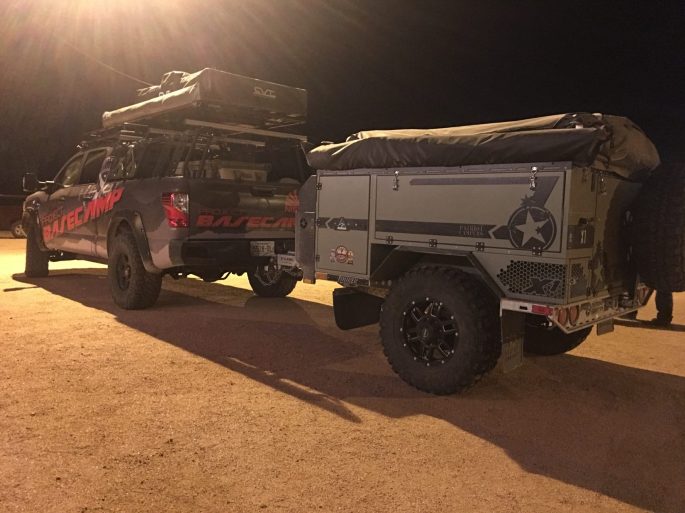 Story by Nathan Adlen at TFLtruck: Nissan invited The Fast Lane Truck to see their first (official) crack at an overlanding truck – the Nissan Titan XD Pro-4X Project Basecamp. For years, off-road vehicles have been extensively modified for extended, rugged excursions. While it’s not a prerequisite for overlanding  (you can do it with a moped and a tent) having a beefy, diesel truck is a smart beginning.

This adventure drive coincides with the 2017 Overland Expo, where Nissan’s overlander trucks was on display May 12-14th in Flagstaff, Arizona.

Extended range, respectable economy and great torque make diesel trucks appealing for overlanding. They are known to be rugged and reliable too. Still, the Big-3’s heavy-duty diesels are pricy and can be ponderous for some drivers. Having something that splits the differences between their heavy-duty trucks and light-duty, 1/2 ton trucks may be the Nissan Titan XD diesel’s best attribute.

Nissan started with a Titan XD Pro-4X with the 310 horsepower, 555 lb-ft of torque, 5.0-liter diesel engine. Hooked up to a six-speed Aisin transmission, the Nissan Titan XD Pro-4X has an electric locking rear differential and tows 11,790 lbs. Being a heavier diesel, it’s rated at 1,744 lbs payload. 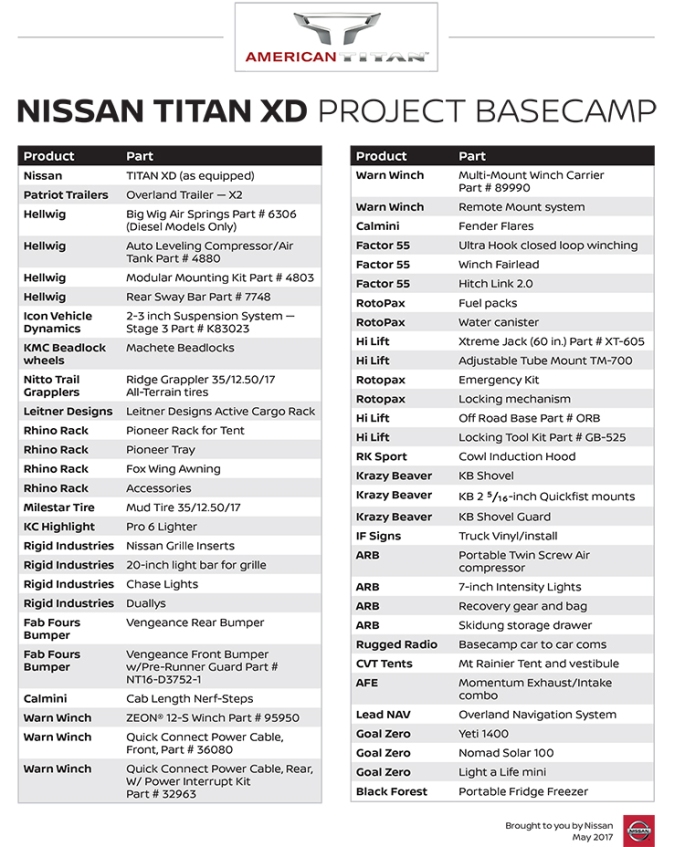 Seeing the Nissan Titan XD Pro-4X Project Basecamp function off-road while it pulls a trailer, in the rough, was like watching a military vehicle at work. I noticed very little sway on either vehicle off-road (mostly washboard and rocky riverbed) and they certainly looked at home when we made camp.

The Patriot X2 adventure trailer weighs about 2,600 lbs and was an outstanding resource on the trail. We used its kitchen and cargo holds to feed over a dozen hungry adventurers. It rarely bounced (unlike other adventure trailers we’ve worked with) and it simply looks awesome.

The accessory list for the Nissan Titan XD Pro-4X Project Basecamp is extensive, but you can purchase these components and pretty much build one of your own. 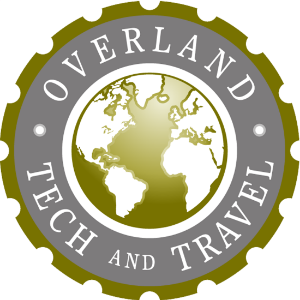 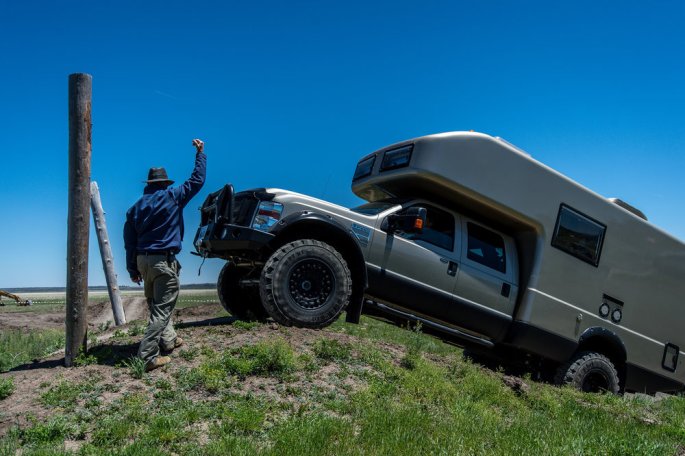 We are the premier overlanding event in the world—no other event offers the scope of classes taught by the world’s leading experts, alongside a professional-level trade show that brings together in one place all the camping and vehicle and motorcycle equipment and services you need to get outfitted and get going.

Sunday, May 14, 2017
8 am to 3 pm: exhibitor show, classes and programs
430 pm: BBQ dinner for Overland Experience attendees, exhibitors, and media

Details about Overland Expo EAST near Asheville, NC in October 2017, will be available in June 2017.

WHY TRAIN WITH US?

Several overland shows now offer worthwhile classes. But no other event comes close to the breadth and depth of education available to Overland Experience attendees at the Overland Expo, from choosing the right vehicle for your needs, to packing it with the proper equipment and provisions, to comfortably handling challenging driving conditions, to winching it out of a hole. Our team of instructors is simply the best on the planet: from ex-Camel Trophy team members to trans-Africa veterans to professional expedition leaders. The 2016 Overland Expo EAST schedule includes 140 classes comprising a full 320 session-hours of instruction. We now have attendees who have been to every Expo and have not run out of things to learn.

The Overland Expo EAST venue lies in the forested heart of Blue Ridge Mountain country, at the beautiful Biltmore Estate in Asheville, North Carolina. We have access to several miles along the French Broad River for our vendors, training areas, and camping. Asheville is a culinary and micro-brew mecca, and before or after the show you can drive the Blue Ridge Parkway or head to the stunning Outer Banks to overindulge in seafood, climb the Cape Hatteras Lighthouse, and rest your hand on the rail from which the Wright Brothers launched their first Flyer at Kitty Hawk.

WHY BUY A WEEKEND PASS?

If you’re not quite ready for the full Overland Experience package, do not imagine your time won’t be busy. A weekend pass (with or without camping) gets you access to over 100 vendors, a drive in a new Land Rover on a specially built course, test BFGoodrich tires, plus dozens of demonstrations, slide shows, films, and roundtable panels on worldwide travel. You can effortlessly fill three days—some guests tell us it takes them hours just to look through all the fascinating overland vehicles in the parking lot. And as always, kids 17 and under get in free to Overland Expo (Biltmore entrance fees may apply).

One word: Community. Of all the comments we get raving about the quality of classes, instructors, and vendors, one impression strikes people the hardest, and that is the people who come to learn, to teach, and to share. The Overland Expo has become a mandatory calendar event for travelers from all over the world, many of whom schedule trans-continental journeys to coincide with a West or East Expo, to see old friends and meet new ones. Those new to overlanding tell us again and again how welcomed they feel by this community whose reason for being, after all, is to explore, learn new things, and meet new people. It’s why our motto is: Overland Expo—where adventure begins and friendships last.

For more information about the Overland Expo West, click (here).